Stop-motion animation is a simple way of making animated films. By gradually moving objects against a backdrop, and taking photos at each stage, you can create the illusion of continuous motion.

In this chapter we will show you how to produce a stop-motion animation video – whether this is with a photo camera, smartphone, webcam or camcorder in photo-camera mode. You’ll learn to set up and shoot the video, and to carry out the post-production process on a computer, tablet and even a smartphone.

Stop-motion animation goes back all the way back to the early days of film-making. And it’s still a great way to tell stories and express your creativity.

Stop-motion is an opportunity to create a film with many ‘actors’, great film ‘sets’, ‘stunts’ and special effects. You have maximum control over the process, and you don’t even have to leave the room.

But the usual stages of film-making – writing a script and/or a storyboard, shooting and post-production – apply here as well. And you’ll be using the camera in the same way – zooming, panning, focusing and applying the rule of thirds. That’s why working on a stop-motion animation is ideal training for the production of a feature film, documentary, music video and so on.

There is a lot to prepare, and creating the figures, props and ‘set’ in particular is a challenging process. You’ll need to be very disciplined and stay focused.

There is a variety of specialist stop-motion-film software you can purchase. This lets you capture images and send them directly to the computer while you’re still shooting. Advantages of using specialist software include being able to view the camera output while you’re filming and see the differences between adjacent images using an overlay function.

In this chapter we focus on producing stop-motion animation by taking individual images and combing them using free and readily available film-editing software. This helps you keep costs down and means you can get started on your project quickly and easily.

The production of every stop-motion film starts with a choice between the 2D cut-out style, which mainly uses paper, and the 3D style. Both styles have advantages and disadvantages.

The basic steps of 2D stop-motion animation: writing the storyboard (top left), drawing and cutting out the backdrop and figures (top right and bottom left), and taking the photos

If you want to make a 3D stop-motion film, you’ll need to create your figures, props and the film set using modelling clay or a similar material. Even if you use toys, in general shooting will be much more time-consuming than for a cut-out animation.

For a 2D film, you only need colouring pens, scissors and paper. But a good drawing or painting takes time and skill. For example, depending on the look you’re after, you might have to learn to draw in a way that gives a sense of perspective. 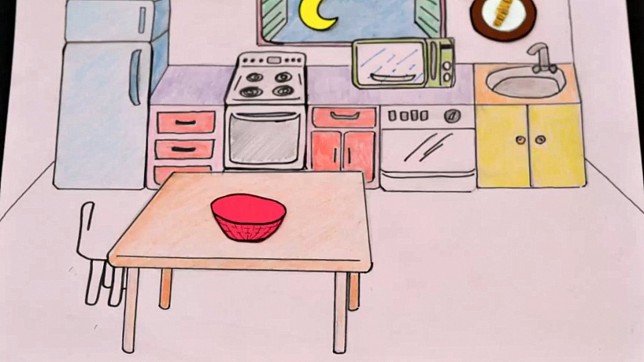 Your choice between the 2D and 3D approach will depend on your vision for the film. And you might want to consider a third option – using a mixture of the two styles. This can create an interesting 3D effect:

Writing a script and/or storyboard

Before you start ‘filming’, you’ll need to decide whether you want to work with a script and/or storyboard, or the story should develop spontaneously during the shoot.

If you want to base your animation on a story, you have a couple of options. You can choose a story you already know, for example a fairy-tale, and develop a storyboard out of that, or you could come up with your own idea yourself. Either way, referring to Writing a synopsis, script, storyboard and shooting schedule will help you at this stage of your project.

One of the things to think about for your storyboard is how you’ll present speech. You can use slides with dialogues on them, between the animated scenes. There could be speech bubbles, like in a cartoon – especially for cut-out animation, but for 3D films too. Or you can record speech and a narrator’s voice-over at the post-production stage.

At this stage it’s also good to start thinking about the sounds and music you want to use.

Preparing for the shoot

Video: 3D stop-motion animation from the series “Trickreich” (in German by WTV) containing pans and zooming

Even in video mode, a photo camera has a much higher resolution than is necessary for film. A lens with a 10 megapixel censor takes 4224px x 2376px images at 16:9 aspect ratio, whereas FullHD resolution is only 1920px x 1080px.

This means you can achieve a zooming effect or a following shot by cropping the image in post-production. If you decide to do this, make sure you factor it in the shooting process.

Video: Cutout animation with voice-over speech: We are what we eat (film from the project CROSSCuT in Italian)

You can record sound for your animation – whether that’s music, dialogue between characters, or a narrator’s voice-over – using any digital recording device. Find out more in Sound, music and sound effects.

Ideally, shooting will have finished and the film will have been edited by the time you ask actors to provide narration or character voices for your animation. That way they can watch the film while they dub it. But dubbing can also be done during the shooting stage; the sound is then matched to the relevant part of the film.

As well as speech, you could record different sounds and music to add to your film, or find music with a suitable copyright licence online. Find out more about sourcing music online in Free internet resources to support your video work.

You can avoid your computer slowing down by reducing the resolution of photos before you import them into the editing software. You can do this with free programs like Google Picasa and IrfanView, and professional software like Adobe Photoshop and Adobe Media Encoder.

If the import has been successful, each photo should now match up with one or more frames in the timeline, depending on the predefined value in the program.

In Adobe Premiere Elements, you can find the default length for film stills under Edit->Predefined Settings->General Settings. Some programs, including Windows Movie Maker, don’t have a preset value, and you’ll have to type in the value manually – for example 0.3s per image.

If you want a photo to be viewed longer than the period in the predefined value, you can extend its duration manually in the same way as you would prolong a film sequence again after it’s been cut.

If the transition between a whole series of images is too fast, you can slow down the  group by selecting all the relevant photos and right-clicking->endure duration

Beyond this, stop-motion animations are edited in the same way as conventional videos. You can add special transitions, effects, sounds, dialogue and music under the respective video tracks. Use titles for the opening and end credits, or for dialogues if you don’t want to dub the film.

For example, selecting a small section of the image changes the framing of a shot. You can also enlarge/minimise an image section frame by frame to achieve a zoom-in or zoom-out effect.

Finally, it’s possible to create a following shot by cropping a larger image into smaller, consecutive sections of equal size. These can then be ordered from left to right/right to left for a horizontal following shot, or upwards/downwards for a vertical following shot. 3

When you’re cropping a larger photo, make sure that the resolution of the resulting small images is high enough for the film project. Otherwise they will look pixellated.

Don’t underestimate how long it can take to produce a stop-motion animation. It all depends on how much time you’ll need to make your figures, props and sets. If you don’t have much time, make a 2D cut-out video instead of a 3D animation film.

Whichever style you choose, write a clear timetable that sets out when each part of the film-making process will be completed by. This will help not only you but the young people as well, who will need to know how much time they have. Create the timetable in the form of a large poster and hang it on the wall where the project is taking place. You won’t be able to predict everything, of course, but a basic schedule will help you a lot.

It’s also important to define the end result: including the type of production (cut-out or 3D animation); length; what the figures, props and backgrounds should look like and how they should be created; the film’s aesthetics, effects, framing types, fluidity of movement, camera angles and effects; sound and the editing. Remember that the quality of the story can affect the final product too.

Talk to the young people and find out how much effort they are prepared to put in. Use this to decide on the right project – one that challenges them but doesn’t overburden them. The examples at the beginning of this chapter each required a different level of effort, and could help with your decision.

Work in small groups of 2–4 people. Most of the time the shooting process needs just two young people – one to move the figures and the other to shoot the pictures. The other young people in the team will need other tasks, for example recording the voice-over, sounds and music.